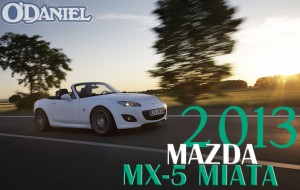 All 2013 Mazda Miata MX-5’s come with a 2.0 liter dual overhead cam engine, paired with a standard five-speed manual transmission, or upgrade to the optional six-speed automatic transmission. The Club and Grand Touring Models come with a six-speed manual transmission, or you can upgrade to a six-speed automatic. The 2013 Mazda Miata Mx-5’s estimated gas mileage is 22 mpg in the city and up to 28 on the highway according to Mazdausa.com. The Club and Grand Touring models are estimated to get up to 21 in the city and about 28 on highway, also according to Mazdausa.com. Convertible models have an option of being a soft-top roof or a hard-top roof.

But Power isn’t the only thing the 2013 Mazda Miata Mx-5 has to offer; it’s got a lot of “goodies” too.  The Sport has standard halogen headlamps, fog lights, tilt steering wheel, 12-volt power outlet, air conditioning, cloth trimmed seats, AM/FM/ CD player with SiriusXM capability, powers window, and steering wheel mounted audio controls. Upgrade to the Club and get all that the Sport has to offer, but you’ll get black clothed seats with red stitching. The Grand Touring has automatic climate control, and leather plus all other options of the Sport and Club models.