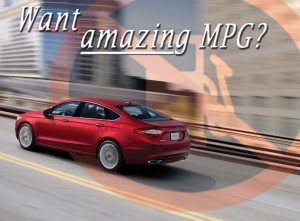 Some of us can remember when fuel was a dollar per gallon, but in these times gas has reached an all-time high of almost five dollars! Many of us feel we can’t do anything about the price of fuel, but we can! Many places around town offer discounts in some way, shape, or form, but we can offer you another aid for your pocket.  Purchasing a newer vehicle may seem like spending a lot of money, but it can actually save you money in the long run. We’ll tell you about a few different options!

If you like smaller economic cars Mazda and Ford have two great gas savers! According to Mazdausa.com, Mazda’s 2013 Mazda2 gets an amazing estimated 29 miles per gallon (MPG) in the city, and up to 35 MPG on the highway with their manual transmission, or get an automatic transmission, and the estimated MPG’s is 28 in the city, and 34 MPG on the highway! Ford offers the Ford Fiesta! Ford.com states the 2014 Ford Fiesta gets an estimated 27 city/ 38 highway MPG with a manual, and 29 city/ 39 highway with an automatic transmission.

If a car just isn’t your style, these SUV’s could be. Jeep, Ford, and Mazda push the limits with these SUV’s! You might be wondering, or you might not even know if these SUV’s could get a good gas mileage with all the perks.  Mazdausa.com boasts about its  CX-5 getting an estimated MPG being 26 city/ 35 highway with a manual front wheel drive model, but it doesn’t change much with the automatic transmission still offering 26 city,  and 32 on the highway.  The All-Wheel drive model of the CX-5 is still offering a surprising 25 city/ 31 highway. So, you’re not compromising much with this SUV! Jeep.com reports the 2014 Jeep Compass gives an estimated MPG as 23 city/ 30 highway with the Sport model, and 21 city/ 28 highway with the Latitude and Limited models.  Last, but definitely not least is the 2014 Ford Escape! The Ford Escape has three models that offer front and all-wheel drives. As seen on Ford.com the Escape S gets an estimated 22 city/ 31 highway, but step up to the SE front wheel drive and it gets an estimated 23 city/ 32 highway. The 1.6 liter with the all-wheel drive model Ford.com gives an approximate MPG as 22 city/ 30 highway.  Go with the 2.0 liter SE front wheel drive model, and get a reported 22 city/ 30 highway.