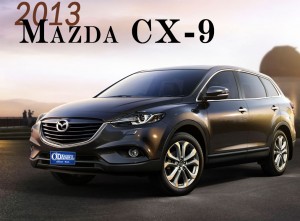 The 2013 Mazda CX-9 has been rebuild based on Mazda’s KUDO philosophy. KUDO means “Soul of Motion”, according to Mazdausa.com. The “new” about the Mazda CX-9 is the sweeping aerodynamic lines and short front end, and longer rear end gives this Mazda a sleek and speedy look.

The 2013 Mazda CX-9 Sport, Touring, and Grand Touring Models come with a 3.7 liter dual overhead cam V6 engine that delivers 273 horsepower, and 270 pounds of torque.  It’s also equipped with a 6-speed automatic transmission with manual shift mode. The Mazda 2013 CX-9 has two options for drive train. Active Torque Split All-wheel (AWD) drive or a Front Wheel Drive (FWD), getting  17 MPG in the city/ 24 MPG on the highway with FWD, and 16 MPG in the city / 22 on the highway AWD drive makes this SUV an affordable option.